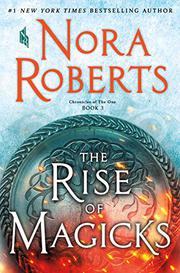 THE RISE OF MAGICKS

In the conclusion to Roberts' Chronicles of The One, Fallon Swift and her army vanquish violent, fearmongering leaders, but in order to reintroduce light to the world, she and her two closest magickal allies must face the darkness and their most dangerous foe back where the Doom began.

Nearly twenty years after the Doom (Of Blood and Bone, 2018, etc.), Fallon Swift has become a powerful witch and raised an army of both magickal and nonmagickal people determined to bring down the corrupt U.S. government as well as Jeremiah White and his anti-magickal Purity Warriors, both of which prey upon magickal people. But as she travels across the country preparing for battle and surveying the land, Fallon finds small pockets of decent, tolerant people who have started or maintained their own mixed communities, much like the successful New Hope. Inspired to protect them and help them build, she works with her family and friends to plan a revolution dedicated to the motto “Light for Life,” so all people can live in peace and security. Creating communities and helping them thrive has the added benefit of providing a place for survivors when Fallon and her allies take over PW strongholds and government research facilities, safe spaces which become breeding grounds for more soldiers willing to fight for the cause. Fallon and her army take bold and inspired actions to gain ground against the darkness, but there’s no question that in order to truly vanquish the evil that’s grown since the Doom, she’ll have to face it at its source. Meanwhile, Fallon’s relationship with Duncan grows ever stronger, and the dance around their attraction moves toward a powerful commitment, though facing off against evil never guarantees survival. Roberts’ magnificent trilogy concludes with another title that perfectly balances magic, adventure, romance, and steely resolve in the battle of good vs. evil while reminding us that while the battles may save us, it’s the home, hearth, and community which sustain us.