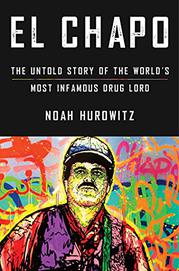 The Untold Story of the World's Most Infamous Drug Lord

A fast-paced study of the infamous, now imprisoned Mexican drug lord and the social structures that supported and enabled his rise.

Joaquín “El Chapo” Guzmán (1957), who headed the Sinaloa drug cartel for decades, may have flattered himself with comparisons to Jesús Malverde, a Mexican counterpart of Robin Hood. Freelance journalist Hurowitz writes that Guzmán, like other drug lords, “certainly distributed portions of their illegal largesse after hitting it big,” funding infrastructural improvements that weren’t entirely selfless—e.g., a new road leading to poppy and marijuana fields in the Sierra Madre. The author makes an important point early on: Guzmán was able to accumulate such wealth and power thanks to the market north of the border, “the world’s largest consumer of illicit drugs.” Indeed, it is American involvement that conditions the entirety of the drug trade, which has relied on a kind of symbiosis with the Mexican government: The drug kingpins support the politicians, the politicians support the drug trade if only by ignoring it. With the collapse of one-party rule in Mexico and the emergence of several competing cartels, the drug trade became a government unto itself, and few were more vigorous in amassing power than Guzmán. Hurowitz’s portrait of Guzmán is a touch overlong and sometimes repetitious—e.g., when he writes, multiple times, of Guzmán’s “beady” or “beady little eyes.” Still, his tale of Guzmán’s rise and vicious rule is comprehensive, as is his account of how Guzmán, rightly paranoid thanks to the willingness of his lieutenants to sell him out, was finally captured and brought to the U.S. “His final act is playing out now, in a tiny cell in a supermax prison on the windswept high desert plains of Colorado,” writes Hurowitz, adding that the drug trade is essentially unaffected by his removal. “In Mexico,” he writes, “the story goes on without him.”

Readers won’t look at the war on drugs the same way after reading Hurowitz’s damning account.