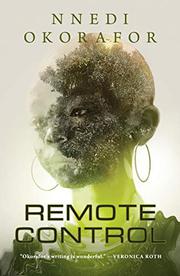 A young Ghanaian girl is forever changed when a delicate artifact falls from the sky and finds its way to her family’s shea tree farm.

The story begins with Sankofa, a young traveler who's feared by many—she is said to be the adopted daughter of death. Sankofa’s touch will kill, and she can wipe out an entire town with a single glance, but she was not always this way. Until the day the meteors fell and she gained this power to take life, she was Fatima, an ordinary and ever curious girl. After she loses everything, including her own name, she begins the journey to understand herself and the powers beyond her control. Aside from her furry companion, a fox named Movenpick, Sankofa must travel alone to reclaim the artifact given to her by the stars. Rich with West African culture and history, including the magical healing powers of shea butter, this book reads more like a folktale than science fiction, though it does include questions about the advancement of surveillance technology, the ever growing presence of American pharmaceutical giants, and the ways they might be connected. With this new novel, Okorafor’s career continues in the same vein as her previous Nebula– and Hugo Award–winning Binti novella trilogy; she has a rare ability to open the reader's mind to various futures while creating complex characters and communities. Though Sankofa's story is short, it's gripping, and readers will likely find themselves rooting for her to find peace.

A captivating world, a tragic tale, and a dangerous future. This story must go on.