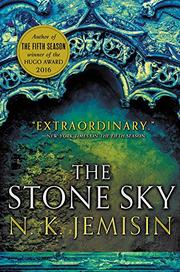 From the The Broken Earth series, volume 3

Jemisin concludes her Broken Earth trilogy (The Obelisk Gate, 2016, etc.), about a vengeful Earth whose tectonic instability can be controlled by the despised and feared orogenes.

Slowly turning to stone as a result of her contact with the Obelisk Gate, Essun nevertheless must repeat that contact to magically grab the long-lost Moon, assuaging the anger of the Earth and ending the devastating Seasons that rock the planet. Meanwhile, her estranged daughter, Nassun, has her own plan to take the Gate for herself and use it to destroy the humans who have responded viciously to the earth shaking and earth-quelling powers of her orogene brethren. Threaded throughout is the story of the stone eater Hoa, who explains his origins from several millennia earlier and how his own struggle to gain his freedom led to the Earth losing the Moon in the first place. Jemisin continues to break the heart with her sensitive, cleareyed depictions of a beyond-dysfunctional family and the extraordinarily destructive force that is prejudice. She wrestles with moral issues at an extreme level: obviously, the cruel discipline and mutilation that orogenes are subjected to violate all standards of decency, and not only is it evil, it’s simply the height of idiocy to exterminate the only people capable of calming a constantly tumultuous landscape. But how does one compassionately instill the appropriate discipline in a child who can also casually and inadvertently destroy a village? Can love survive such training? Jemisin deliberately refuses to provide easy answers: they’re simply not available, in this world or ours.