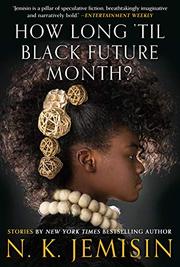 HOW LONG 'TIL BLACK FUTURE MONTH?

This collection of short stories by Jemisin, the first person to win the Hugo award for best novel three years in a row (most recently for The Stone Sky, 2017), eloquently develops a series of passionately felt themes.

Many of these science-fiction and fantasy tales explore the nature of resistance. Some do so on a personal scale: In “The Elevator Dancer,” an office worker and a security guard separately search for the tiniest drop of joy in a grim theocratic future, while in “Valedictorian,” a high school student fiercely challenges herself to excel while knowing that alien forces outside her community take a specific interest in the best and brightest. Other stories fight back with a wider scope. “Red Dirt Witch” begins with a mother’s struggle to protect her children but ends with a family’s commitment to the civil rights movement. “The Effluent Engine” takes place in an alternate 19th-century New Orleans where a Haitian spy seeks technological support for her island’s resistance to the French. In contrast, “The Trojan Girl” is set in a virtual future where rogue bits of code quest for freedom and enhanced capabilities. “Cloud Dragon Skies” is a cautionary tale about pollution and the dangers of ignoring local culture, while “L’Alchimista” and “Cuisine des Mémoires” celebrate the pleasures and profound power of food. Others are specific and defiant responses to classic sf stories. The collection also includes an early version of the Broken Earth universe and a lovely tragedy set in the lands of the Dreamblood duology.

These stories span Jemisin’s career; they demonstrate both the growth and active flourishing of one of speculative fiction’s most thoughtful and exciting writers.