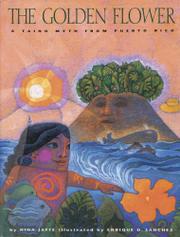 A Taino Myth From Puerto Rico

The island of Puerto Rico, originally called Boriquén by its Taino inhabitants, was once, according to legend, a barren mountain. A child, looking for food, collected a pouch full of seeds and planted them at the top of the mountain, which then sprouted a forest. A vine in the forest grew a magnificent orange flower, from which emerged an enormous golden “globe that shone like the sun”—a pumpkin (calabaza). Unbeknownst to the people, this pumpkin contained the sea. When two men, fighting over the pumpkin, dropped it, it rolled down the mountain, where it burst open, releasing the sea and “whales, dolphins, crabs, and sunfish.” The waters rose until they stopped at the edge of the magic forest, creating the island of Boriquén. Beautifully and simply written, this little-known tale is a welcome addition to creation myths. Unfortunately, although Jaffe acknowledges help in ascertaining “historical and linguistic accuracy and detail,” she includes no original source. The illustrations in luscious tropical colors, with shapes and patterns (especially spirals) reminiscent of pre-Columbian art, are perfect. (Picture book/folktale. 5-10)