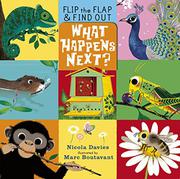 From the Flip the Flap & Find Out series

A hungry chameleon spies a juicy grasshopper. Turn the half-page. His long tongue shoots out to catch it. Going on, Davies presents other unexpected animal behaviors. A beaver swims underwater into its cozy, dry den. A peacock displays his tail and screeches at a female. A bee dances to tell others in her hive about a patch of flowers. Chimps catch termites with a stick. The final spread in this sequencing exercise offers a matching game to remind young viewers of the actions described. Boutavant's bright digital art spreads across the pages, the flaps matching and smoothly revealing each different scene. There is much for pre-readers to look at and enjoy in his busy natural world. Also in the Flip the Flap & Find Out series, Who Lives There? introduces animal biomes by hiding the answer to the titular question under one of four tabs. A jungle, a freshwater pond, a grassland, a coral reef and the Arctic offer distinctly varied habitats for the 20 different species introduced. The final spread asks youngsters to group the species. While these paper flaps last, they’re sure to get plenty of flipping.

Entertainment and education in a pleasing package.