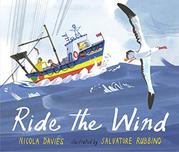 A boy rescues an albatross after it is hooked by a fishing line.

Javier is out at sea with his fisherman father, Tomas, and Uncle Felipe, helping with the fishing lines, when he sees an albatross has become hooked. Uncle Felipe unhooks the bird and throws it onto a corner of the boat, ignoring it. But Javier sneaks the still-alive bird into the boat’s hold and later, when they reach their home port, hides the bird in the storeroom behind the house. Caring for the bird with the help of neighbors, Javier hopes to have the bird healed by the time he goes back out to sea in two weeks. But he comes home one day to discover that his father, having found out about the bird, has sold it to a fairground manager. Javier’s already-tenuous relationship with his father since the death of his mother boils over. Javier finds the bird and runs off with her to the cliff’s edge, reckless of his own safety, as he is determined to convince the bird to fly away. The assured storytelling has a crispness that feels fresh and immediate, and the colorful illustrations echo this immediacy and confidence in their spontaneous-looking execution. All human characters are illustrated with beige skin and dark hair and eyes, and the honorifics (Señor, Señora, Señorita) probably indicate, due to albatross range, a South American setting.