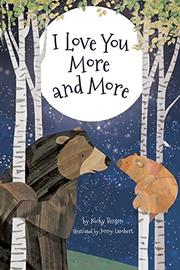 I LOVE YOU MORE AND MORE

A bear cub gets a load of lyrical loving from a lumbering parent in this nature walk.

Expressed in stumbling rhyme—“I love you more than trees / love to change with every season. / I love you more than anything. / I cannot name just one reason”—Benson’s perfervid sentiments accompany scenes of bear and cub strolling through stands of birch, splashing into a river to watch (just watch) fish, and, in a final moonlit scene, cuddling beneath starry skies. Foxes, otters, and other animal parents and offspring, likewise adoring, make foreground cameos along the way in Lambert’s neatly composed paper-collage–style illustrations. Since the bears are obvious stand-ins for humans (the cub even points at things and in most views is posed on two legs), the gender ambiguity in both writing and art allow human readers some latitude in drawing personal connections, but that’s not enough to distinguish this uninspired effort among the teeming swarm of “I Love You This Much!” titles.

A particularly soppy, sloppy addition to an already-overstuffed genre.