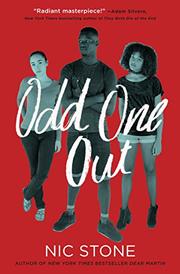 Not your usual love triangle.

Decatur, Georgia, teen Courtney “Coop” Cooper lives next door to his best friend, Jupiter “Jupe” Charity-Sanchez, a girl he’d be (even more) in love with if she weren’t gay—and crushing on new girl Rae (half white and half Chinese-Jamaican), who may or may not be straight. Coop agrees that Rae is pretty cute, and the three become close friends as they navigate difficult, mercurial feelings about crushes, sexuality, and friendship. Biracial (black/Latinx) Jupe has two dads: Cuban-American Papi and African-American Dad. Coop, who is black, has a single mother (his father died in a car crash) and regards Jupe’s dads as father figures. Rae feels like an interloper in the midst of this intimate friendship—Coop and Jupe have been snuggling at sleepovers for years. Just to make things more complicated, Rae is unsure if she has a crush on Courtney or Jupiter. Maybe both? In this novel that is divided into three parts and narrated first by Coop, then Rae, then Jupe, Stone (Dear Martin, 2017) has created well-rounded characters whose voices are distinct. The story’s authentic and honest depictions of sex, parent-free social interactions, and Gen Z’s highly critical take on gender roles and sexuality hit the mark.

A he said, she said story that stands out.