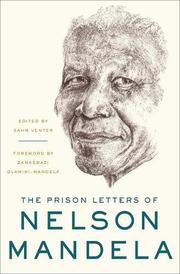 THE PRISON LETTERS OF NELSON MANDELA

From August 1962 to February 1990, Mandela (1918-2013) was imprisoned by the apartheid state of South Africa. During his more than 27 years in prison, the bulk of which he served on the notorious Robben Island prison off the shores of Cape Town, he wrote thousands of letters to family and friends, lawyers and fellow African National Congress members, prison officials, and members of the government. Heavily censored for both content and length, letters from Robben Island and South Africa’s other political prisons did not always reach their intended targets; when they did, the censorship could make them virtually unintelligible. To assemble this vitally important collection, Venter (A Free Mind: Ahmed Kathrada's Notebook from Robben Island, 2006, etc.), a longtime Johannesburg-based editor and journalist, pored through these letters in various public and private archives across South Africa and beyond as well as Mandela’s own notebooks, in which he transcribed versions of these letters. The result is a necessary, intimate portrait of the great leader. The man who emerges is warm and intelligent and a savvy, persuasive, and strategic thinker. During his life, Mandela was a loving husband and father, a devotee of the ANC’s struggle, and capable of interacting with prominent statesmen and the ANC’s rank and file. He was not above flattery or hard-nosed steeliness toward his captors as suited his needs, and he was always yearning for freedom, not only—or even primarily—for himself, but rather for his people, a goal that is the constant theme of this collection and was the consuming vision of his entire time as a prisoner. Venter adds tremendous value with his annotations and introductions to the work as a whole and to the book’s various sections.

A valuable contribution to our understanding of one of history’s most vital figures.