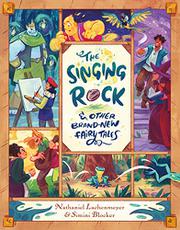 The theme of persistence (for better or worse) links four tales of magic, trickery, and near disasters.

Lachenmeyer freely borrows familiar folkloric elements, subjecting them to mildly comical twists. In the nearly wordless “Hip Hop Wish,” a frog inadvertently rubs a magic lamp and finds itself saddled with an importunate genie eager to shower it with inappropriate goods and riches. In the title tale, an increasingly annoyed music-hating witch transforms a persistent minstrel into a still-warbling cow, horse, sheep, goat, pig, duck, and rock in succession—then is horrified to catch herself humming a tune. Athesius the sorcerer outwits Warthius, a rival trying to steal his spells via a parrot, by casting silly ones in Ig-pay Atin-lay in the third episode, and in the finale, a painter’s repeated efforts to create a flattering portrait of an ogre king nearly get him thrown into a dungeon…until he suddenly understands what an ogre’s idea of “flattering” might be. The narratives, dialogue, and sound effects leave plenty of elbow room in Blocker’s big, brightly colored panels for the expressive animal and human(ish) figures—most of the latter being light skinned except for the golden genie, the blue ogre, and several people of color in the “Sorcerer’s New Pet.”

Alert readers will find the implicit morals: know your audience, mostly, but also never underestimate the power of “rock” music.