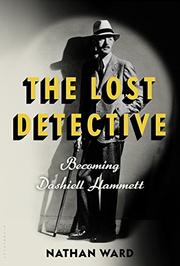 Journalist and former American Heritage editor Ward (Dark Harbor: The War for the New York Waterfront, 2011, etc.) began this lively, but ultimately slight, book with a single question: how did Hammett transform himself “from Pinkerton operative to master of the American detective story”? The many biographies of Hammett (Ward cites a few in his bibliography) failed to answer his question, so he set out on his own investigation. Unfortunately, finding little evidence of Hammett’s years working for the Pinkerton National Detective Agency, Ward often guesses what Hammett might have felt, done, or thought. Although he speculates, for example, that “doing his scores of operative reports” honed Hammett’s ability to write pithy narratives, none of those reports are in the Pinkerton archive at the Library of Congress. Ward can only deduce what they might have contained from other operatives’ work. Other information about the Pinkerton years came from Hammett researcher and journalist David Fechheimer, who tracked down operatives who had known Hammett. Ward also closely reads Hammett’s detective stories for clues. Since none of his early writing has survived, however, even Hammett’s motivation to become a writer is shrouded in mystery. What is clear was his inability to continue to work for Pinkerton because he was weak, and often bedridden, from tuberculosis contracted during World War I. With a wife and children to support, Fechheimer suggests, “he would have done whatever he had to do to make a buck.” “Down the years,” writes Ward, “Hammett must have wondered what might have happened had he gone on chasing crooks for the agency; whether, once he had run out his string as an operative, he could have settled into a desk job bossing younger detectives.” Or maybe not. Ward ends the biography in 1935, when Hammett was famous, celebrated, and usually drunk.

A jaunty narrative for Hammett and hard-boiled fans only.