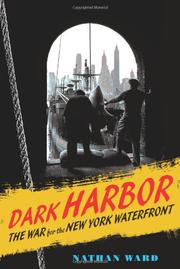 The War for the New York Waterfront

The author focuses on New York Sun investigative reporter Mike Johnson’s Pulitzer-winning series of articles in 1948, which uncovered the graft and terror tactics that characterized life on the docks. These tactics ultimately brought down International Longshoremen’s Association “president for Life” Joseph Ryan and improved conditions for the embattled workers. Packed with colorful characters including the murderous thug “Cockeye” Dunn, fearsome “Tough Tony” Anastasio, dapper Abe “Kid Twist” Reles and Charlie “The Jew” Yanowsky (who was ice-picked to death), the book reads like classic noir. Beleaguered laborers marinate in dirty saloons, murders abound, death threats fly and the nation is forced to reckon with the reality of organized crime as sensational TV government hearings drag the dirty business into the light. Arthur Miller was inspired by the murder of a reform-seeking longshoreman to write a screenplay about the milieu. More famously, writer Budd Schulberg’s take on the issue became the classic Marlon Brando film On the Waterfront (1954), whose principal characters and situations were inspired by actual people and events. Ward’s most engaging characters are the tough, streetwise priest John Corridan, a plain-talking rabble-rouser who courageously walked the docks and agitated for justice—Karl Malden memorably played the figure based on Corridan in Waterfront—and the congenitally crooked union boss Joe Ryan, a blustery operator who hid his misdeeds behind a smokescreen of anti-communist rhetoric. The author deftly marshals vast amounts of research to tell his story, including original interviews with players from the era, and he richly evokes the atmosphere of mid-century New York.

A lucid, illuminating history of the epicenter of organized crime in America.