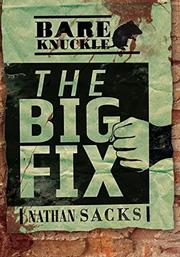 From the Bareknuckle series

Corruption is everywhere in 1870s New York City, and George Choogart wants to be the journalist who exposes it.

George arrives from England with a job offer from the New York Times and, as a test of his skills, is assigned the task of finding a story so new as to be unfamiliar to the editor. He thinks he has found it in Lew Mayflower’s Woodrat Saloon, where he goes undercover as a fighter to learn more about illegal bare-knuckle boxing matches. Politician Big Jim Dickinson finds fighters there for use in his secret and very crooked matches. Although George is in the thick of the intrigue and danger, it is female reporter Holly Quine who gets the scoop. Sacks nicely captures the chaos of the time and place and weaves a fast-paced, action-packed tale. Detailed descriptions of the brawls and bare-knuckle fights make up the bulk of the text. Several peripheral characters, while quite colorful, appear to have little purpose. In the end, George leaves New York and heads west, thus paving the way for a series of tales set in the Woodrat with new fighters and their back stories and penned by different authors. Publishing simultaneously are The Giant, by Jonathan Mary-Todd, Fighter’s Alley, by Heather Duffy Stone, and Lightning’s Run, by Gabriel Goodman.

Lots of action and low page count should propel reluctant readers along.