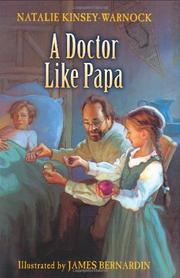 In a brief episode exploring the theme of challenging gender roles that is loosely based on local history, the devastating flu epidemic of 1918 tests a Vermont child’s resolution to become a country doctor like her father. Resisting her mother’s insistence that it’s no job for a woman, Margaret cajoles her father at last into allowing her to accompany him on house calls. She proves an able assistant—but needs all her skills and stomach later that winter when, on the way to a remote relative’s with her little brother, she comes upon a farmhouse with a nearly dead dog outside, and inside only a small child shivering among the bodies of her stricken family. In a quick final chapter, Margaret grows up to achieve her heart’s desire, and even to see her own little daughter show early signs of continuing the family profession. Kinsey-Warnock (Lumber Camp Library, below, etc.) folds in a subplot involving a beloved uncle who comes back from the war deeply depressed and minus an arm, slips in a snippet about Elizabeth Blackwell for further role-modeling, and closes with a historical note. Young readers will be engrossed, following this plucky but vulnerable child through a time of hardship and widespread tragedy. Illustrations not seen. (Fiction. 9-11)