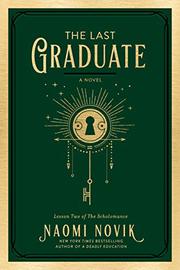 A teenage witch with a natural affinity for dark magic prepares to run a deadly graduation gauntlet in this sequel to Novik's Deadly Education (2020).

Galadriel "El" Higgins has finally reached her senior year at the Scholomance, putting her one step closer to her ultimate goal: get back home or die trying. After getting a sneak peek at the monster-packed hallway she must survive if she wants to graduate, the witchy teen returns to her classes and cliques with scarcely more insight than before. El knows enough to realize that her mana stores are a fraction of what they should be—come graduation, she will lack the magical juice she needs to kill monsters and make it out alive. Her fake-dating relationship with Orion proves to be a lucky "in," netting her a new string of tenuous alliances as well as access to a wellspring of free mana. But what could be a compelling adventure story falls apart here, as the novel relies on relentless bouts of infodumping to keep readers up to speed on where the Scholomance's monsters come from and what they can do to unsuspecting students. None of these paragraphs-long blasts of information recount the details of El's last excursion, however, and so readers who have forgotten Novik's previous novel, or who have never read it at all, will find no springboard ready to help them dive into the author's newest offering. Those who stumble upon this volume risk being unmoored, as the narrative picks up immediately following the events of its predecessor, without stopping to introduce anything, including the narrator. Ultimately, El's seemingly encyclopedic knowledge of every monster in the school, combined with her continued refusal to enter into any genuine alliance with classmates, leaves readers to wonder what she could possibly have left to learn—or fear—in the Scholomance.

A sequel that repeats the mistakes of its predecessor while failing to break new ground.