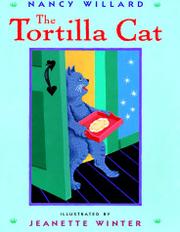 When each of the five Romero kids come down with the same fever that killed their mother and many people in the community, their father, a doctor, fears for their lives. Each sick child has a vision of a cat who speaks a catchy rhyming refrain and bears a tray with a tortilla. The children become well, and claim it was the Tortilla Cat who cured them. Dr. Romero believes the cat is more fever dream than real, but when he becomes ill, the cat appears to him, leaving five kittens—one for each child—as a remembrance. The connection or significance of the kittens is never really clear, which turns an enjoyable read into a rather abstract adventure, but the Latin American flavor of Winter’s surreal illustrations restores much of the magic. (Fiction. 6-10)