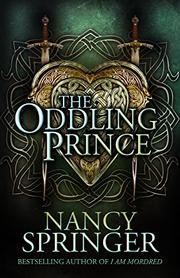 The king of Calidon is about to die when a mysterious stranger saves him at the last minute—but the stranger carries a secret that could tear the kingdom apart.

A magic ring, after appearing seemingly out of nowhere, is killing the king. Even Prince Aric can't take it off his father's hand, but just when all hope seems lost, a beautiful, fey young man appears at the castle. He tells Aric his name is Albaric and says he's there to help the king. Miraculously, Albaric is able to get the deadly ring off the king's hand, saving his life. Not only that, but he tells a wild story of how the king got the ring from the Queen of Elfland. She captured the king when she saw him out riding, then kept him as her prisoner and companion in her strange world. But the king longed to go home, and when the queen finally granted his wish, she sent him back to the exact moment he'd left, eliminating all memories of his time in Elfland and the son they had together. That son, of course, is Albaric, who sacrificed his immortality to save the father who forgot him and who is devastated when the king distrusts and dislikes him. Even worse, he struggles to adapt to the world of mortals and is unsure of what to do with himself now that the king is alive but doesn't accept him. Aric, however, feels an instant bond with Albaric and vows to help his beloved brother find his place in a world where he will always be an oddling. The prolific Springer (Drawn into Darkness, 2013, etc.) certainly has a knack for a specific twee tone, as this novel floats along like one of the songs Albaric is so often singing. It's a sweet little tale, best suited for those who like their stories entirely without stakes or drama. Not only do no characters lose anything in any meaningful way, but the story doesn't even drum up the fear that they might. Problems are instantly solved, villains immediately eliminated or redeemed. The arc of the king's disdain for Albaric falls flat. Perhaps Springer is aiming for a kind of stylized narrative detachment here, but it comes across as affected and hollow.

A tale of two brothers for whom things work out a little too well to be worth the investment.