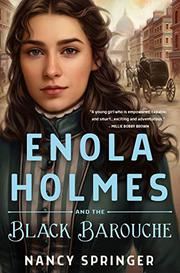 ENOLA HOLMES AND THE BLACK BAROUCHE

From the Enola Holmes series, volume 7

Teenage sleuth Enola Holmes is back in a follow-up to earlier, middle-grade offerings.

A self-described “Scientific Perditorian,” grandiloquent Enola Holmes arrives at Baker Street to find her brother, Sherlock, nearly catatonic due to a fit of melancholia. However, when Miss Letitia Glover shows up, convinced that news of her twin sister Flossie’s death cannot be true, the puzzle-loving Holmes siblings can’t resist taking on the case. Flossie’s husband Caddie Rudcliff, the Earl of Dunhench, sent word that a fever had quickly overtaken Flossie and that she was immediately cremated without so much as a funeral—the same fate as his first wife, Myzella. As Sherlock and Enola investigate, readers are treated to an altogether delightfully engaging romp about Victorian London through visits to horrifying asylums and sprawling manor houses, the antics of a fractious horse, and lush sartorial descriptions. Women’s agency—or the lack thereof—is brought to the forefront as Enola repeatedly encounters difficulty due to her gender. With nearly a decade having passed since Springer penned a case for Enola (with a graphic novel and a film being released in the interim), this is an excellent entry point for both established fans and newcomers, and it includes a helpful recap in a prologue from Sherlock’s point of view. Enola’s voice is wholly charming, prone to just the right bit of humorous snark and a penchant for lists. All characters are presumed White.

A clever whodunit with broad appeal.