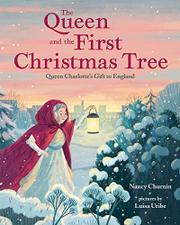 THE QUEEN AND THE FIRST CHRISTMAS TREE

A German-born princess uses her memories of home to create an English Christmas tradition.

Born into royalty in Mecklenburg, Germany, in 1744, Princess Charlotte prefers being outdoors to going to balls. She loves trees, and at Christmas, she always brings a yew branch indoors to decorate. A marriage proposal from King George III of England means leaving her home at the age of 17. Lonely and not speaking a word of English, she relies on the precious things she brought along, including a yew branch. “With this, she could make magic in her new home.” In 1800, having borne 15 children of her own, she holds a Christmas party for 100 children to ring in the new century, decking the halls with a large tree from the palace grounds. Simple prose and light watercolors keep this retelling of historical events within the understanding of children who like a good princess story. The book’s creators don’t shy away from including some children of color among white ones—this was, after all, during the time of slavery—but the text leaves some doubt about how, exactly, they fit into the group of “children at court.” An afterword provides context to the queen’s life and times, including the information that she was an abolitionist.