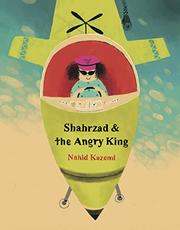 SHAHRZAD AND THE ANGRY KING

This reframing of the classic One Thousand and One Nights explores universal themes through a contemporary lens.

Having fallen in love with stories at an early age, pale-skinned Shahrzad, with her springy black curls, is “always waiting for another story.” By the time she meets a sad boy in the park, she is an adept storyteller and budding writer. The account of the boy’s family—they fled an angry king whose life was touched by tremendous loss—introduces additional dimensions to this rich tale that is, by turns, realistic and magical. Readers journey with Shahrzad as her imagination takes flight via a toy airplane. Her encounter with the angry king hones her narrative powers while enabling the king to transcend his prolonged grief and revoke his harsh laws. The illustrations convey Shahrzad’s probing wit and a youngster’s whimsical representation of the story world, which includes a reference to One Thousand and One Nights (or “maybe it was just ten”). While Shahrzad wears the same dress throughout the book, her appearance varies, alternating in scale and vantage point, thereby raising an intriguing question about the protagonist’s perspective. Are we seeing her as a “girl” or as a writer recalling her own childhood memories? In this manner, the overall narrative invites us to ponder the nature of time as both cyclical and linear.

Clever construction and intertextual inspirations weave a thought-provoking homage to a fabled heroine and master storyteller.