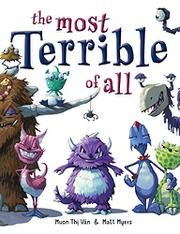 THE MOST TERRIBLE OF ALL

A monster discovers that another creature’s horribleness just might outshine his.

Smugg, a horned, furry, purple monster, consults his magic mirror each day to confirm that he is the “most terrible one of all.” True to his name, he revels in his status and is troubled when one morning the mirror confides that a new arrival next door is “a million times more terrible.” Charging into the neighbors’ house, he confronts the beasts he finds there, but each denies being the most terrible. Then siblings Jaws and Claws point him in the right direction: upstairs to see their new sister. What follows is a takedown of mammoth proportions as the big-eyed, blue-spotted baby misbehaves mightily. The over-the-top actions pictured are made all the more humorous by the deadpan delivery of the text. Rhyming couplets and internal rhymes are interspersed throughout, and a few nonsense words appear, but much of the narrative unfolds in simple declarative sentences. The illustrations, created in acrylic and oil, emphasize the ooey, gooey textures of slime and drool and the sharp, shiny claws, fangs, and horns, but visual jokes, bright colors, and vaguely retro details keep things more amusing than alarming.

This monster mashup of a new-baby story and a creepy-creature competition doesn’t necessarily break new ground, but it’s likely to scare up a few giggles all the same.