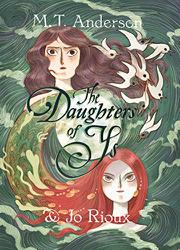 THE DAUGHTERS OF YS

King Gradlon won his wife’s hand by murdering her first husband. Upon her mysterious death, their two daughters, Rozenn and Dahut, are sickened by their father’s debauchery and consumed by grief. Several pages of wordless panels show the girls growing up and growing apart. Rozenn retreats to the countryside, meets Corentin, a “holy hermit,” and falls in love with a fisherman. Dahut commits herself to learning her mother’s magic, including seducing, murdering, and sacrificing a string of young men to protect the city. Dahut’s ultimate betrayal of her sister brings about the deadly denouement. Anderson drew on multiple sources to retell this story of Ys, a “famed city of pleasures” stolen from the sea and doomed to destruction. Overtones of other tales, from the lost land of Lyonesse to the destruction of Sodom and Gomorrah, echo through the pages of this morality tale. Blood and betrayal permeate the plot while natural sounding dialogue and perfect pacing draw readers along smoothly. Rioux’s art adds a suitably Celtic feel, with swirling patterns, medieval costumes, and a red-haired sorceress at its center. While nudity and sexual activity both occur, as do beheadings and drowning, neither the text nor the pictures are particularly explicit. Main characters are white; clothing and textual references indicate contact with Near and Far Eastern nations.

Intriguing and accessible, this thought-provoking tale will be new to many.