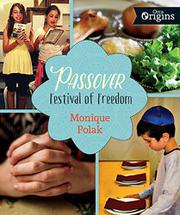 From the Orca Origins series

An overview of the holiday of Passover is elaborated with personal narratives, the story’s connection to the Holocaust, and various Seder customs practiced in several countries around the world.

A Canadian author and child of Holocaust survivors, Polak introduces the topic through her own personal account of a secular Jewish upbringing in Montreal. She focuses on how her research on and interest in the Holocaust brought her full circle to hosting her first Seder. The first chapter is devoted to the traditional Haggada, the book used to recount the ancient story, which includes the various rituals performed at the ceremonial meal. She introduces Ben, a Lithuanian survivor, and his version of his family’s Passover observance before World War II. From here Polak clearly connects the biblical story of oppression, escape, and freedom to the Holocaust while segueing into modern-day observance and traditions. Two concluding chapters outline the Jewish community’s charitable commitment to providing food baskets and support for the needy as well as the diversity of multicultural traditions for the holiday as celebrated in not only Israel, but in some Asian, European, and African countries. A plethora of photographs, informational sidebars, drawings, and recipes break up the substantial yet enlightening text.

Good supplementary material to increase the holiday’s meaning and currency for older children.