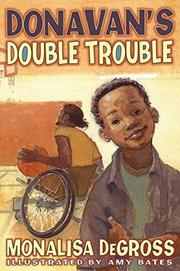 African-American fourth grader Donavan still keeps the word jar he started in third grade, so big words are easy. His problem is math; his friends Pooh and Eric decide Donavan has a math block. This is compounded by the return of his favorite uncle Vic who lost both legs below the knee in the war. Donavan doesn’t know how to relate to this new Uncle Vic, who was both a firefighter and a basketball star. Donavan’s family wants Uncle Vic to display his carvings at the school’s Heritage Month, but Donavan doesn’t want kids asking his uncle stupid questions and staring. When Uncle Vic helps out with a math strategy and talks to Donavan about his disability, Donavan realizes tackling hard problems is a major part of life. DeGross’s overlong and, at times, didactic follow-up to Donavan’s Word Jar (1994) does feature a realistically conflicted and charming main character. Libraries seeking bibliotherapy for young relatives of disabled veterans might want to add this to their collections, as should those seeking chapter books starring African-American kids. (Fiction. 7-10)