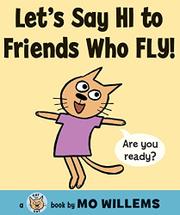 The same sort of gentle, surprise ending found in Cat the Cat, Who Is That? (2010) comes into play in this second offering about Willems’s new feline character. In this title, Cat the Cat cheers on her friends Bee the Bee, Bird the Bird and Bat the Bat as they show off their flying skills. When she encounters Rhino the Rhino (astride a bouncing pigeon playground toy), Cat the Cat and her winged friends are a bit dubious that he can fly as well. “Watch me!” he says confidently, and a page turn reveals Rhino the Rhino piloting a zippy red plane. This looks like too much fun to resist, so Cat the Cat grabs onto the tail of the plane and zooms through the air calling out, “Let’s ALL fly!”—and they do. The author has achieved another triumph in this new picture-book series, which also has all of the hallmarks of accessible, engaging beginning-reader fare as well. (Picture book/early reader. 2-7)