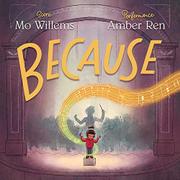 Willems departs from his usual comic fare in this ode to the many people that inspire and contribute to the creation of art in young people.

Each spread in the first half of the book states a causal effect: “Because a man named Ludwig wrote beautiful music— / a man named Franz was inspired to create his own. // Because many years later, people wanted to hear Franz’s beautiful music— / they formed an orchestra.” Musicians who have practiced diligently are invited to participate, workers make sure the concert hall is ready, and ushers open the doors. This chain continues as each person contributes to the culmination of a present-day grand orchestral performance at which a little tawny-brown–skinned girl is present, “because” her uncle has caught a cold and given her his ticket. This little girl is changed by this experience, and in the second half of the book, she grows up to create her own music that then inspires another child, who listens outside. Debut illustrator Ren’s delicate cartoon art depicts both a realistic multicultural community and magical representations of music and inspiration. Both the protagonist and the child who hears her are depicted borne aloft by tendrils of colored music.

While many books celebrate the arts and creativity, this one stands out for recognizing the importance of community support; from the orchestra librarian to the music lovers who purchase tickets, everyone contributes to the culture of creativity.