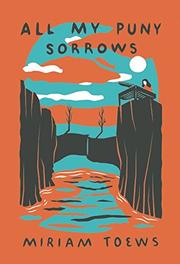 ALL MY PUNY SORROWS

A Canadian writer visits her older sister, a concert pianist who's just attempted suicide, in this masterful, original investigation into love, loss and survival.

“She wanted to die and I wanted her to live and we were enemies who loved each other,” Yolandi Von Riesen says of her sister, Elfrieda. Toews (Irma Voth, 2011, etc.) moves between Winnipeg, Toronto, and a small town founded by Mennonite immigrants who survived Bolshevik massacres, where the intellectual, free-spirited Von Riesen family doesn’t share the elders' disapproval of “overt symbols of hope and individual signature pieces.” Yoli looks back over time, realizing that the sisters' bond is strengthened by their painful memories. The girls' father baffles neighbors by supporting Elf's creative passions and campaigning to run a library. His suicide and absence from their adulthood make him even more important to his daughters as their paths diverge. Elf travels around Europe, emptying herself into Rachmaninoff performances; Yoli writes books about a rodeo heroine, feeling aimless and failed. Elf’s husband appreciates her singular sensitivity as a performer, but this capacity for vulnerability dangerously underpins her many breakdowns and longstanding depression. Yoli’s men are transient, leaving her with two children. Toews conveys family cycles of crisis and intermittent calm through recurring events and behaviors: Elf and her father both suffer from depression; Yoli and her mother face tragedy with wry humor and absurdist behavior; and two sisters experience parallel losses. Crisp chapter endings, like staccato musical notes, anchor the plot’s pacing. Elf’s determination to end her suffering by dying takes the form of a drumbeat of requests for Yoli to help her commit suicide. Readers yearn for more time with this complex, radiant woman who fiercely loves her family but cannot love herself.

“Sadness is what holds our bones in place,” Yoli thinks. Toews deepens our understanding of the pain found in Coleridge's poetry, which is the source of the book’s title.