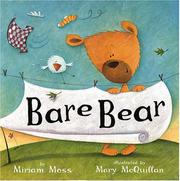 It’s best to have a change of clothes, as evidenced by this bear whose line-drying garments are blown away, leaving him . . . bare. In pursuit of his clothes, Busby encounters a hare in a “red riding hood” who’s using his T-shirt (called “underwear” here) to cover her basket: “Hare held up the cloth. / “Yes, I see you’re undressed! / You are short of clothes. / Let me help find the rest.” Things grow more madcap still when hare and bear meet a mouse polishing his clock with the bear’s sock, and he too echoes the aforementioned refrain. Enter warty ogre. He frightens all three until he tells them he’s a vegetarian, returns the bear’s shorts (he had them on his head) and joins the hunt for the final errant sock. Surprise! They end up back at the bear’s lair (where his last sock is), and Busby finally gets to deliver his punch line: “I’m not a bare bear!” McQuillan’s textured paintings are friendly and fun, but even they can’t rescue the bland, forced rhymes and downright silly story. (Picture book. 3-6)