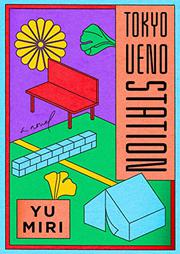 A ghost haunts a Tokyo train station, with history and tragedy much on his mind.

Kazu, the late narrator of Yu’s second novel to be translated into English, spent his life as an itinerant laborer, one of eight children who moved from his home in Fukushima to help build facilities for the 1964 Tokyo Olympics. (Fukushima was the epicenter of the 2011 nuclear power-plant disaster, which also plays into the story.) Kazu recalls pieces of his life in digressive fashion as he wanders the grounds of a homeless encampment near a busy Tokyo train station. He listens in on conversations and recalls how he himself wound up residing there. His mood is scattered (“noises, colors, and smells are all mixed up, gradually fading away, shrinking”), but it’s soon clear in this brief, piercing novel that Kazu is circling around a series of heartbreaks, and when Yu finally hits on them—Kazu's separation from his family for work, the death of his son, the financial desperation that led to his homelessness—the novel gains a pathos and focus that justify its more abstract and lyrical early passages. As Kazu chronicles the funeral rites and his own fallen fortunes, the novel becomes a somber cross section of Japanese society, from the underclass to salarymen to the royal family to the homeless people subject to the whims of government (like the potential closure of the camp due to the 2020 Tokyo Olympics). Yu’s first novel in English, Gold Rush (2002), was a hyperviolent, American Psycho–esque tale of Yokohama street youth. This more restrained and mature novel is a subtle series of snapshots of “someone who has lost the capacity to exist, now ceaselessly thinking, ceaselessly feeling.”

A gemlike, melancholy novel infused with personal and national history.