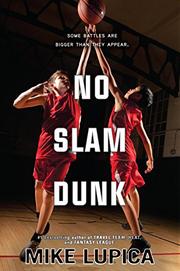 Can you be a leader and a teammate on the court and off?

Wes Davies should be playing the best basketball of his life; he is a small forward on the elite Annapolis Hawks seventh-grade team, and his former nemesis, flashy point guard Dinero, is now his teammate. But victories on the court can’t make up for troubles at home. Wes’s father, Lt. Michael Davies, has returned from a final Navy SEAL mission in Afghanistan with injuries that are both physical and emotional. No longer his son’s mentor and hero, Lt. Davies has moved out of the family home to combat the elusive enemy that is PTSD, relying on alcohol rather than his wife and son for support. Wes is convinced that if he can be a basketball standout, his father will again be the man he was. Meanwhile, Dinero has issues of his own, with a hypercompetitive father who aggressively stage-manages his son’s career. Short chapters that leave readers intrigued will capture basketball fans who love exciting play-by-play and who appreciate references to the stars of today. Lupica handles complex issues of scarred veterans, fathers and sons, and the difference between competition and battle with ease, making the familiar story of the redemptive power of sports feel new. Wes is white, and Dinero is cued Latinx; naming conventions point to a diverse team overall.

An easy-to-read sports book that taps into basketball as both a means of connecting characters and a platform for problem-solving.