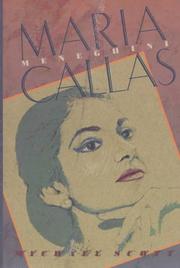 A study of Callas (1923-77) not to be missed. Scott (Artistic Director/London Opera Society; The Great Caruso, 1988) met and saw Callas perform several times in houses throughout the world and proves even more personally knowledgeable and fine-tuned about her voice than John Ardoin did in his encyclopedic The Callas Legacy (1977). Though a biography that breaks myths and draws upon fresh accounts written by Callas's family and secretary during the past decade, as well as upon interviews with Callas's fellow singers, conductors, and producers, this is as much a book about singing as about a person. The focus is equally upon the voice as the life, or upon the life of the voice, with only about a ten-year span in which the voice was at its most secure and responsive to every nuance of feeling Callas wished it to produce. Born in New York, she early began vocal training, went to Greece in the late 30's to study, began concertizing and learning roles. Most adept at florid bel canto, her voice stood up to the rigors of Isolde, Turandot, and Leonora, roles that called for a big sound to battle against the orchestra. She gave up these roles (Turandot was ``a voice-wrecker,'' and houses called for Isoldes in German, not Callas's limpid, spontaneous, tender Italian), turned largely to Bellini, Rossini, Donizetti, and the young Verdi, in whom she found huge rooms of fresh vocal drama untouched by fellow singers, allowing space for her dramatic coloratura. While still ``amazingly fat,'' and jealous of her svelte sister, Jackie (as she was to be later of another svelte Jackie), she married her aging patron, Giovanni Meneghini, and in her voice's declining years ran off with aging billionaire Aristotle Onassis. Callas died in Paris, weakened by pills, abandoned by Ari. A feast for fans, refreshing as a bowl of sun-ripened pears. (Illustrations—not seen.)