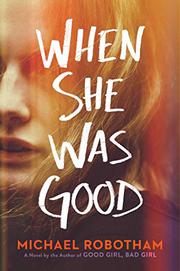 WHEN SHE WAS GOOD

Cyrus has finally tracked down Sacha Hopewell, the London special constable who carried little Evie Cormac out of a house of horrors seven years ago, where a man was tortured and killed trying to protect her. The little girl, whose true identity remains a mystery, was dubbed Angel Face and made a ward of the court; eventually she was given the name Evie and moved to Langford Hall, a secure children’s home. Meanwhile, Sacha and her family were threatened, and she eventually fled London. Cyrus hopes Sacha can shed light on what really happened to Evie in the days following her rescue and offers to take Sacha to see Evie, but she declines. Cyrus is then called to the scene of retired police officer Hamish Whitmore’s suspected suicide, where he finds evidence that suggests Whitmore was murdered. Cyrus advises his old friend Detective Lenny Parvel to treat the death as a homicide. Cyrus soon finds out that Whitmore had been investigating a series of child murders attributed to recently deceased pedophile Eugene Green, and, shockingly, the last name on his list is Angel Face. Whitmore’s family also reveals that a man with pale blue eyes and a half-moon scar, claiming to be police, had already questioned them. That’s no police officer, and it’s not long before Cyrus, with Sacha’s help, is racing to find out Evie’s true identity in a bid to save her from a powerful group of people who want her silenced at any cost. Once again, Robotham delves into some very (very) dark territory, and the horror steadily mounts as Evie, who has a strange ability to tell when people are lying, finally reveals what really happened to her before her rescue. Cyrus and Evie, both trauma survivors, are quirky, complex, and endlessly fascinating creations, and Robotham’s meticulously crafted tale is propelled by their alternating first-person narratives. Readers will be putty in this supremely talented author’s capable hands.