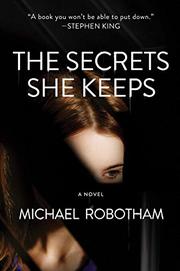 THE SECRETS SHE KEEPS

Every day, Agatha watches Meg from the window of the London grocery store where she works. Meg is pregnant, beautiful, and privileged, with a handsome husband, two lively children, and a perfect home—and a popular blog where she memorializes it all. For Agatha, who wants a life like Meg’s and instead comes home to an empty and shabby apartment, life would be infinitely better if she could lure Hayden back. A communications technician in the Royal Navy, Hayden dumped her when he deployed and now wants nothing to do with her, but Agatha has yet to tell him that she’s pregnant, due in early December, as is Meg. Meanwhile, Meg’s husband, Jack, a TV sports journalist, has been less than enthusiastic about Meg’s current pregnancy, and their marriage—despite what Agatha thinks—is far from perfect. Meg is also hiding a secret: she slept with a family friend and former lover, Simon, following a big fight with Jack. Agatha takes the opportunity of their joint pregnancies to talk to Meg one day, and they soon grow better acquainted, but Agatha keeps Meg in the dark when it comes to her own troubled past as well as the real reason she and Hayden aren’t together and why having a baby is so important to her. Told in Agatha’s and Meg’s alternating, distinct first-person voices, the story of how the women's lives overlap as Meg’s marriage and Agatha’s life both unravel starts with a gradual glimpse into the two women’s worlds, then escalates into something much more sinister. Robotham captures the physical misery that often characterizes late-term pregnancies and writes convincingly in a female voice, but where this book excels is in the increasing sense of threat he crafts so well.

With its interestingly imperfect characters and escalating sense of urgency, this novel will keep you reading as fast as you can.