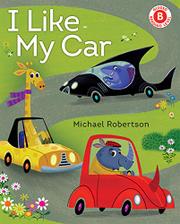 Fishes of the sea, birds of the air, and critters of the land unite around a single belief: Their cars rock!

Even struggling readers will be challenged to find anything at all difficult in this latest entry in the I Like to Read series. It certainly won’t be the writing, as all pages contain only the words “I like my…car,” the sole textual variation being the color of each vehicle and a single “too.” Nor will they tussle with the plot, such as it is. As readers watch, a series of jaunty animals, each tucked snug behind the wheel of their conveyances (the sole exception being the chauffeured poodle in a limo), declares their fondness for their autos. Saving the book from utter innocuousness is its 1950s-vibed art. The endpapers sport such snazzy accoutrements as fuzzy dice; the style of each car is apt and distinctive; subtle in-jokes (a turtle applies a coat of wax; a pine-shaped air freshener dangles from the shark’s rearview mirror) abound. With each detail, Robertson’s mix of digital and physical art (including an etching press, water-based printing inks, and an onion bag) pays off. As they should, these drivers revel in their cars’ flashy, colorful looks, and they are set against some seriously mod backdrops.

Though it’s not groundbreaking, this book is bound to please beginning readers with automotive fixations and patience for no more than six words to a page.