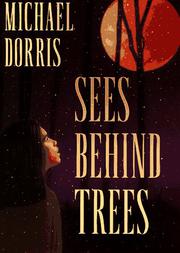 With characters who are wholly believable yet true to their era, Dorris (Guests, 1994, etc.) has created a coming-of-age novel from the myopic perspective of a sight-impaired Native American boy in 15th-century Virginia. Walnut, who is terribly near-sighted, learns to listen carefully and interpret nonvisual cues in such a way that he earns his adult name, Sees Behind Trees, and embarks on a great journey as companion to Grey Fire, an elder he much admires. It turns out to be his own adventure as he not only survives alone in snow, but rescues an infant. In recognizing how each individual has his or her own experiences, tests, and lessons, Sees Behind Trees comes to wisdom earlier than most. Dorris has captured the angst that is part of the invisible doorway between childhood and adulthood in this appealing, but not over-romanticized, view of what life may have been like for a pre-Columbian Powhatan youngster, how strangers were viewed by a small village group, and how differences were handled. The exquisitely crafted language remains so simple it can be enjoyed by middle-graders, while the brevity and adventure promise wide readership among less-skilled teenage readers. (Fiction. 8+)