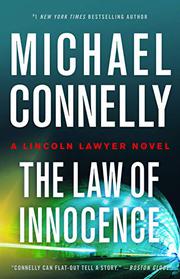 THE LAW OF INNOCENCE

Mickey Haller, the Lincoln Lawyer who’s mostly played second fiddle to his half brother, Harry Bosch, in recent years, gets a most unwelcome star turn when he’s arrested for murder.

The evidence is neck-deep that Haller’s ex-client, chronic con man Sam Scales, was dumped into the trunk of the attorney’s trademark car and then shot to death inside his garage as Haller slept above—or, as prosecutor Dana Berg, a true believer in Haller’s guilt, maintains, watched it all from a lot closer. The noose fits so tightly around Haller’s neck that it’s got to be a frame-up, but why, and by whom? Identifying the most likely perp as Louis Opparizio, a Vegas mobster Haller made look guilty on the stand nine long years ago, doesn’t clear things up. It just leads his law partner, Jennifer Aronson, and his investigator, Cisco Wojciechowski, to the FBI investigation of BioGreen Industries, a firm in which Opparizio owned a major stake, and up against FBI agents Rick Aiello and Dawn Ruth, who make it clear that they have no intention of complying with the subpoena issued by Violet Warfield, the meticulous and fair-minded judge trying the case. As Haller plots his own defense, sometimes from within a jail cell, sometimes when he’s out on bail, he’s haunted by the old adage about how any lawyer who represents himself has a fool for a client. Of course Connelly’s not going to convict his franchise hero of murder; of course Opparizio and the FBI are mixed up in the case; of course there’ll be loose ends left hanging. None of that matters. For sheer courtroom inventiveness and suspense, Haller has never shone brighter.

A virtuoso performance even by Connelly’s high standards.