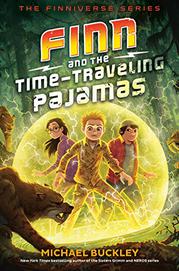 FINN AND THE TIME-TRAVELING PAJAMAS

From the Finniverse series, volume 2

Six months after tackling invading aliens in Finn and the Intergalactic Lunchbox (2020), young Finn now takes on a time-traveling monster at the behest of his much older self.

A jumble of clever twists and goofy set pieces that never quite coalesce into coherence, the tale sends Finn Foley and buddies Lincoln Sidana and Julep Li on a long series of short time hops to eras past and present—in some of which they participate in or watch running battles between their older selves and an armored monster named Paradox who proclaims a vague intention to destroy time, or rule the universe, or something. Meanwhile, hotly pursuing Time Rangers who dress and talk like cowboys place hastily made clones that look like the trio but act like cats in the present day to serve as stand-ins…to the consternation of Finn’s baffled but take-charge little sister, Kate. In the climactic battle, Paradox survives attacks from saber-toothed tigers and armies of Revolutionary War soldiers as well as futuristic energy weapons but unravels at last when Finn reboots the entire timeline. Unfortunately, that puts a number of significant events in the previous volume in the “never happened” category. Their surnames cue Julep and Lincoln as Asian; some Rangers are people of color, and the rest of the cast presents as White.

Fun at (ahem) times, but readers of the opener are going to be let down by the revelation that it didn’t count.