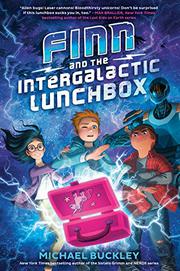 FINN AND THE INTERGALACTIC LUNCHBOX

From the Finniverse series, volume 1

Can the fate of the universe depend on a unicorn lunchbox?

Eleven-year-old Finn Foley, his mother, and his younger sister, Kate, moved to Cold Spring near the Hudson River when his dad walked out. He hates it. Every day since school started, bully Lincoln Sidana has made his life miserable. Their most recent dust-up lands them in the principal’s office, locked in until they become friends. Totally unlikely…but then so is a wormhole opening in Kate’s lunchbox, brought by Finn to school by mistake. The wormhole sucks Finn in and spits out a high-tech robot named Highbeam. Finn is quickly sucked back to Earth, but a strange piece of alien technology has grafted itself onto his chest—and every time he touches the lunchbox, he zips through space. Highbeam’s from a part of the universe where a race called the Plague—they look like giant locusts—has conquered and laid waste to countless civilizations. The Plague wants the wormhole generator, and now they know about Earth. Can Finn and friends defeat an intergalactic scourge? Buckley kicks off his new SF/adventure series with this high-energy, slightly sarcastic opener. Realistic kids, wild aliens, and unicorns sure to surprise readers add to the fun. Finn presents white, but the supporting cast is multiethnic, mostly cued by naming convention (Lincoln’s implied South Asian). The whizz-bang, globe-threatening finish has closure but sets up Book 2 nicely.

If the laughs don’t keep the pages turning, the action will.