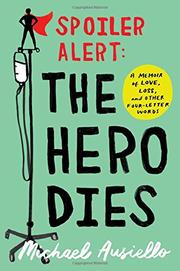 The Hero Dies: A Memoir of Love, Loss, and Other Four-Letter Words

A veteran entertainment journalist shares the bittersweet story of his relationship with his husband and his tragic death from cancer.

In 2001, Ausiello, founder of TVLine.com, met and instantly gelled with handsome Christopher “Kit” Cowan. A hilariously described “aggressive form of CPR” between the two men sealed the romantic deal, and they became inseparable. Both would endure the navigation of sexual and bodily insecurities and some peculiar quirks like Kit’s assortment of sex toys and the author’s penchant for wine and an ever blossoming Smurf collection. Rough interpersonal waters would lead to a mutual “soft breakup” and to couples therapy before their world would be spun upside down by an unforeseen scare. The tone of the memoir changes when Kit discovers an abnormality in his colon, which brought up the same cancer fears Ausiello experienced in his youth when his mother and father both passed away by the time he was 22. Kit was diagnosed with a rare aggressive neuroendocrine tumor, which carried a hopeful if precarious prognosis. Faced with the possibility of his time with Kit ending, the author proposed marriage, and Ausiello describes the event in tear-jerking details and blubbering adoration. He intersperses the narrative with anecdotes from their evolution as a couple, sweetened by love and affection yet easily bruised by infidelity, personal differences, and petty bickering. As chemotherapy took its toll on Kit and the prospect of remission dimmed, the author remained a strong, dedicated husband. Kit succumbed to the cancer just 11 months later, leaving Ausiello feeling like “a chunk of me had broken off and attached itself to Kit as he drifted away.” Though he was left to deal with the expansive void left in Kit’s wake, the memoir’s conclusion is leavened with hope, healing, and enduring devotion. Tender, profoundly poignant, and cleverly written with equal parts wit and integrity, the book is grounded in the realities of modern relationships and the grim fate of mortality.

A heartbreaking memoir infused with dark humor and composed with true love.