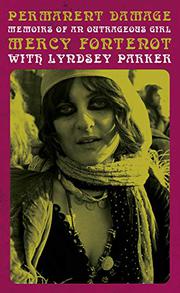 Memoirs of an Outrageous Girl

by Mercy Fontenot with Lyndsey Parker

A repetitive catalog of sex, drugs, and rock ’n’ roll by a pioneering groupie.

“It was never a goal for me to be famous. I wanted to be infamous.” So writes Fontenot (1949-2020), a member of the Frank Zappa creation called the GTOs, or Girls Together Outrageously, who recorded an album that, Dee Dee Ramone exclaims later in the book, he paid $500 for on the used-disc market. Fontenot did a little bit of everything to earn a living in 1960s Los Angeles, and she cut an odd figure: admittedly often overweight but with an exuberant, heavily made-up style that musicians like Alice Cooper and the members of KISS would appropriate. Her musical tastes were broad. She dug Gram Parsons particularly: “We basically bonded over soul music and heroin. Sometimes we’d just watch TV, and I learned quickly that if I walked into Gram’s place and Hee-Haw was on, I had to be real quiet.” Though the author writes that “sex has never been a big deal for me,” various contortions and partners figure into these pages, which eventually become tiresome. Mostly, though, Miss Mercy, as she was known, enumerates the many kinds of drugs she consumed and the trouble that got her into, even though there was always someone worse. As she writes about a fellow groupie, “she was actually younger than me, but she looked about seventy-five years old. After she died, I found out she’d been shooting Ritalin for years. It made her look like a fossilized tree. Or like Keith Richards.” A crack addiction left Fontenot homeless for a couple of years—though “the homeless crackhead lifestyle could actually be a ton of fun.” Alas, the fun times ended, and Fontenot died in July 2020 at the improbably old age of 71, long having felt “like a ghost already.” Pamela Des Barres, the author’s friend and fellow groupie, provides the afterword.