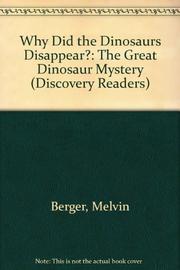 WHY DID THE DINOSAURS DISAPPEAR?

The Bergers (The Whole World of Hands, 1982, etc.) encourage readers to become detectives, searching for clues hidden in rocks and fossils to solve the mystery of how the dinosaurs became extinct. Rocks are ``like the pages in a book,'' containing fossils that ``tell the story of what happened long ago.'' From them, scientists know how big the dinosaurs were, how they lived, what they ate, and how fast they ran. But, the authors note, clues to their disappearance are still being found; an important crater was discovered as recently as 1992. The discussion of scientific theories will make readers believe that they can make a contribution to the subject, too. This strong work on a perennially favorite subject will pique children's curiosity, while Harrison's full-color naturalistic drawings will satisfy even seasoned dinosaur enthusiasts. (Picture book/nonfiction. 6-10)