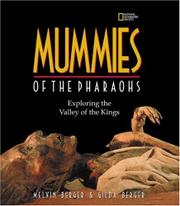 MUMMIES OF THE PHARAOHS

Exploring the Valley of the Kings

An introduction to ancient Egypt and the Pharaohs buried in the Valley of the Kings. The authors begin with how archaeologist Howard Carter found the tomb of King Tut, then move back 3,000 years to the time of Thutmosis I, who built the first tomb in the Valley of the Kings. Finally they describe the building of the tomb of a later Pharaoh, Ramses II. The backward-forward narration is not always easy to follow, and the authors attribute emotions to the Pharaohs without citation. For example, “Thutmosis III was furious [with Hatshepsut]. He was especially annoyed that she planned to be buried in KV 20, the tomb of her father.” Since both these people lived 3,500 years ago, speculation on who was furious or annoyed should be used with extreme caution. And the tangled intrigue of Egyptian royalty is not easily sorted out in so brief a work. Throughout, though, there are spectacular photographs of ancient Egyptian artifacts, monuments, tomb paintings, jewels, and death masks that will appeal to young viewers. The photographs of the exposed mummies of Ramses II, King Tut, and Seti I are compelling. More useful for the hauntingly beautiful photos than the text. (brief bibliography, index) (Nonfiction. 10-12)