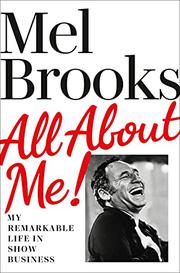 My Remarkable Life in Show Business

The madcap director, actor, and comedian adds another arrow to his quiver with this spry memoir.

Brooks (b. 1926) has been dining out on the anecdotes in this book for decades. One, which Johnny Carson devotees may recall, is when Sid Caesar, for whom Brooks wrote in the 1950s, held him outside a high-rise hotel window until Brooks stopped complaining about the smoke in the room. “Sid said, ‘Got enough air?’ ” Brooks recounts. “In a very calm voice I said, ‘Oh yes. Plenty! I’ve had enough.’ ” Another is the author’s affectionate ribbing of his late wife, Anne Bancroft: “I think one of the reasons I married Anne Bancroft was the fact that her real name was Anne Italiano and, boy, could she make spaghetti.” There’s lots of delightful material, even if it’s well rehearsed. For example, Brooks recalls how he changed his name from Melvin Kaminsky—“which would be a good name for a professor of Russian literature”—by painting his mother’s maiden name, Brookman, on the drums he played as a teenager and running out of room at “Brook,” with just enough space for the final letter. The author’s anecdotes about early life in Depression-era Brooklyn are charming, as are his notes on the dawn of TV. He also dishes nice dirt on the making of his films, some of which seemed to proceed by accident: Dustin Hoffman was to have starred in the original version of The Producersbut instead won the lead in The Graduate. Enter Gene Wilder. Richard Pryor didn’t show for History of the World, so enter Gregory Hines, with whom star Madeline Kahn had worked. Peter Boyle and Marty Feldman (“he more or less sees out the sides of his face like a horse”) earned roles in Young Frankensteinvia a right-place, right-time agent. And so on. Though the book is sometimes labored, if you want to know about the making of “the greatest farting scene in cinematic history,” here’s your source.

Fans of Borscht Belt shtick and classic comedies will enjoy Brooks’ stroll into the past.