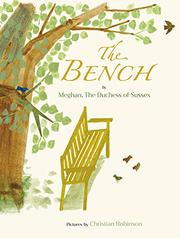 by Meghan, The Duchess of Sussex ; illustrated by Christian Robinson

The titular bench, in several iterations, becomes a touchstone fixture in the lives of several father-and-son pairings.

The text is related in the voice of a loving partner who is mostly off page as they address the father figure who appears in every picture along with his son. In all but the first and last pictures, which depict a White, redhaired, bearded man and his offspring, each father-son pairing is different, as is the bench and its location. Some benches are clearly in public places (a park, a bus stop), while others are in what appear to be residences or backyards; most are ambiguously situated, allowing readers to reach their own conclusions as to where each father-son pair is. What is constant is the love between them, whether the tutu-clad father and his similarly attired son, both with light brown skin, using a bench to stretch; the Black father and babe enjoying a sun-dappled nap; or the Sikh father cheering his son’s soccer exploits. While Robinson’s painterly illustrations are characteristically beautiful, the text from Meghan, The Duchess of Sussex, is less accomplished. Written in abcb rhyming quatrains, it often struggles for rhyme and scansion, sometimes to tortuous effect: “You feel happiness, sorrow / One day be heartbroken. / You’ll tell him ‘I love you’ / Those words always spoken.”