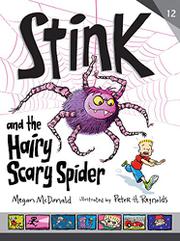 STINK AND THE HAIRY SCARY SPIDER

From the Stink series

Judy Moody’s little brother, Stink, returns for another scientific adventure, this time battling his long-held fear of spiders. After crafting a jumping origami frog, Stink brings his project to the backyard to give it a test hop. Stink’s frog leaps out of sight, and while looking for it, Stink comes across a hairy, pink-toed spider. A timorous Stink seeks out Judy’s help to find his origami frog, and Judy does him one better: The siblings put in the work to cure Stink of his fear. Those familiar with the Judy Moody and Stink books will find more of the same here, with Reynolds’ broad, round illustrations accompanying McDonald’s charmingly optimistic characters. Newcomers will be able to slide in with ease; there’s no extensive backstory here to wade through—just some quirky kids dealing with a common fear. The reading level is pitched to those just beginning to dip their toes in the chapter-book pool. Judy and Stink are white, but there’s a bit of diversity in the supporting cast. The book includes origami instructions in its end pages.

More of the same, but here that’s a good thing.