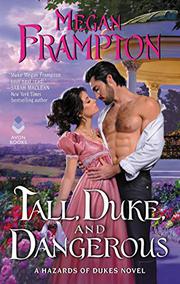 From the Hazards of Dukes series, volume 2

A duke and a lady who feel out of place in society find a sense of belonging with each other.

Treated as a servant up until the deaths of her duke father and her cruel stepmother, Ana Maria is conflicted about her new life as a lady. She loves the fancy gowns but loathes all the suitors interested only in her large dowry. She craves independence and purpose. After Nash, Duke of Malvern, helps her out of two dangerous situations, he insists on teaching her self-defense techniques. Even if he is a behemoth who communicates mostly through grunts, Ana Maria desires him. She expects he sees her like a sister because they grew up together, but Nash’s feelings toward Ana Maria are not of the brotherly sort. However, even though he’s looking to marry, she’s too risky of a choice since he actually cares about her. Nash worries that his abusive, philandering father’s penchant for violence was passed down. When their fighting lessons turn physical in a different way, the pair have to decide if they’re willing to open up to each other enough to create something real and lasting. Narrow in scope, this story homes in on its leads and the internal conflicts that initially keep them apart. Although repetitive and unsubtle, the prose is nonetheless quick-paced and often sharp and funny. With a captivating, easy-to-love couple and deliciously hot scenes, this breezy read will entertain, if not totally enchant.

A solid choice when searching for a light, charming, historical happy-ever-after.