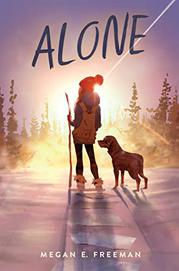 Freeman’s middle-grade debut starts with a wallop and carries on from there.

Twelve-year-old Madeleine Albright Harrison is inadvertently left behind when her whole region is abruptly evacuated in the night. Although there had been hints of unrest, she has no real idea why everyone left or when—perhaps if—they’ll ever come back. At first, there’s still electricity and running water, but as days turn into weeks and then months, utilities fail, and Madeleine comes to realize that she’s truly on her own. A Colorado winter will be coming soon enough. After rescuing a neighbor’s dog, her only companion, she becomes increasingly sophisticated in her survival efforts, collecting food and water, learning how to light a fire in her father’s woodstove and, bicycle helmet secured in place, teaching herself to drive a car. Not everything works. At one point she encounters but evades a vicious group of looters. Later she survives both a tornado and a wildfire that sweeps through her neighborhood. But it’s loneliness that becomes her greatest enemy and books from the local library that ultimately sustain her. Madeleine relates her own riveting, immersive story in believable detail, her increasingly sophisticated thoughts, as years pass, sweeping down spare pages in thin lines of verse in this Hatchet for a new age. Characters default to White.

Suspenseful, fast-paced, and brief enough to engage even reluctant readers.