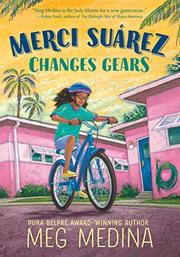 Merci navigates the challenges of being a scholarship kid at a posh South Florida private school and the expectations of and responsibilities to her intergenerational family.

Eleven-year-old Merci Suárez isn’t the typical Seaward Pines Academy sixth-grader. Instead of a stately mansion, Merci lives with her parents and older brother, Roli, in one of three identical homes next to her Cuban-American extended family: Abuela and Lolo, Tía Inéz, and her rambunctious little twin cousins. At school, Merci has to deal with condescending mean girl Edna Santos, who loves to brag, boss around her friends, and throw out hurtful comments that start with “No offense….” Although Merci wants to earn money so that she can afford a new bike, she’s stuck volunteering for Sunshine Buddies, in which current students mentor new ones. What’s worse is that her assigned buddy is Michael Clark, a new tall white boy in her class. At home, Merci’s beloved Lolo begins to act erratically, and it becomes clear something secret and serious is happening. Medina writes about the joys of multigenerational home life (a staple of the Latinx community) with a touching, humorous authenticity. Merci’s relationship with Lolo is heartbreakingly beautiful and will particularly strike readers who can relate to the close, chaotic, and complicated bonds of live-in grandparents.